A New York police officer who was diagnosed with leukaemia which doctors believe was brought on by his efforts on September 11th was saved by a transatlantic stem cell donor who joined the donor register thirty years ago.

Greg Holgerson, 42, was told his leukaemia could be linked to his involvement in the recovery efforts after the September 11th attacks on the World Trade Centre. Greg was present at the site on the evening of the attack to secure the area and help with the recovery. ‘Everyone there was covered in dust and debris. It looked like it was snowing, it was just surreal. I was born and raised in New York and it was heart-breaking to see. There were so many innocent lives taken.’

Twelve years later, in 2012, father-of-two Greg was diagnosed with leukaemia while working for the Nassau County Police force. ‘When I first went into the hospital they knew I was a police officer and they asked me if I was at the World Trade Centre on the day, as there is a link between the two. You see more and more people that were down there getting sick – it’s not a coincidence.’

After Greg’s diagnosis, a worldwide search of donor registers found him a perfect match in donor Sue, 52, who lives in Northampton in England. Sue signed up to the Anthony Nolan register in the 80s when she was in her early twenties. ‘I signed up after I met my husband Robert, who lost his mother to leukaemia when there sadly wasn’t a register around to help,’ said Sue. ‘I just thought, why not join? It didn’t involve too much effort from me and it seemed like a worthwhile thing to do. ‘It was a real shock to hear I was a match so many years later. I was surprised by how few people actually get a match so it was very special.’

The donation itself went smoothly for Sue: ‘At no time was it painful, it was so easy and I would have done it again all again. Afterwards I had a cup of tea and headed home.’ Due to anonymity rules Greg had to wait two years to contact his donor personally, but he often wondered about the stranger who had selflessly donated to save his life.

The pair finally met for the first time in May, two years after Sue saved Greg’s life, at a fundraising gala for the New York hospital where he received cancer treatment. Greg said, ‘It was an unbelievable moment to finally meet Sue in person and give her a big hug – she’s my hero. It’s impossible to find the words to sum up what she has done for me and family; ‘thank you’ just doesn’t seem enough. Put simply, if it wasn’t for her I might not be here today. ‘I feel lucky to have a donor but I’m even more fortunate to have Sue because she is so lovely. It’s been amazing to share our different sides of the story and to show her the impact her donation has had. She feels like part of the family now!’

Sue said, ‘He often says he can’t thank me enough but seeing his family together and knowing those children will be able to grow up with their dad, and that his wife has a husband, is thanks enough for me.’ 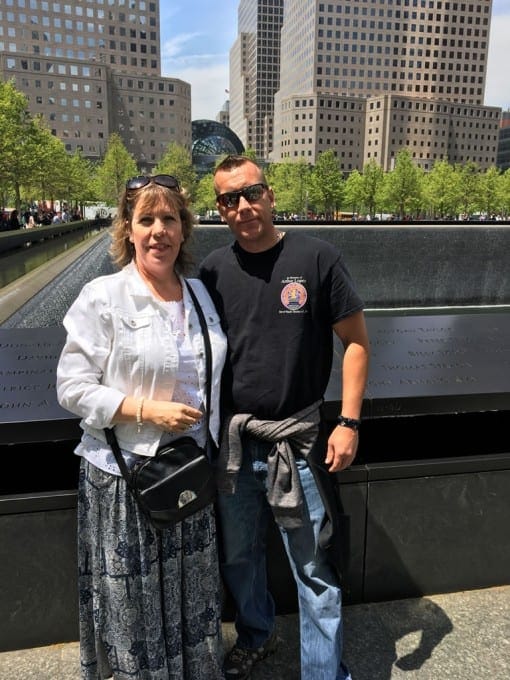