Gift of Life held the Steps for Life 5K Run and Walk of Boston on Sunday, April 30. For two special people among the nearly 700 people arriving at the Chestnut Hill Reservoir, this was one of the most exciting days of their lives – they were about to meet for the first time, and one of them had saved the other’s life. How do you save someone you’ve never even met? You cure that stranger’s life-threatening cancer by sharing your peripheral blood stem cells or bone marrow.

After waiting for nearly two years since the transplant took place, the moment was finally here. Dr. Corey Cutler, a senior transplant physician at Dana-Farber Cancer Institute’s Clinical Research and Lymphoma Program, invited stem cell transplant recipient Peter Levine to the stage. Peter, a Boston native who owned and operated Ross Dry Cleaners on Newbury Street for many years, became ill in 2015. He was diagnosed with non-Hodgkin’s lymphoma, a cancer of the immune system. Doctors recommended a stem cell transplant, and Peter was fortunate that Gift of Life quickly found his matching donor in its registry.

Cheryl Rosenberg, a 24-year-old business consultant from New York, was so overjoyed to meet Peter she could barely speak, and in a heartwarming turnabout, Peter, the cancer patient whose life she had saved, put his arm around her in support. “I discovered that I didn’t need to be this big courageous person to have an impact on the world,” said Cheryl, “I just needed to do this little thing [donate stem cells] and it ended up being so big and amazing!” 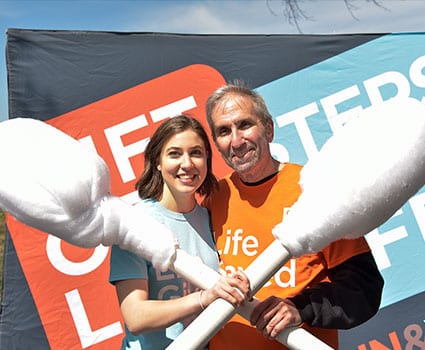