Christopher Salz, a resident of Neustadt, Germany, was surprised during his wedding reception when his groomsmen stopped the party to start up a projector. They played a video for him, a greeting from Adam Tornheim – the American man who had saved his life through a stem cell transplant five years earlier.

Although Christopher and Adam had never met, he and his bride Maike watched with their hearts full of emotion – their wedding would never have been possible if not for this stranger. Then, as the video ended, Bruce Springsteen’s “Born in the U.S.A.” began to play – and from a side room in walked Adam himself. As Christopher wiped away tears of astonishment and emotion the two men embraced, and then Adam received a warm hug from Maike as the wedding guests cheered.

This incredible, life-affirming moment began with events nearly six years earlier, in 2012. After visiting friends in Spain for a birthday celebration, Christopher was left with what felt like a hangover that persisted for days afterwards. He finally went to the hospital and received the shocking diagnosis of non-Hodgkin’s lymphoma. At home in Germany, he checked into the University Hospital of Cologne (Uniklinik Köln), where he spent the entire next year receiving treatment.

Doctors quickly determined that his only chance of survival was a stem cell transplant, but as with more than 70% of patients, his sister Eva was not a match for him. Only a stranger would be able to save him.

Christopher was lucky: that stranger had already been in Gift of Life’s registry for years. Adam Tornheim joined the registry while passing a donor recruiting drive at Brandeis University in 2005. “I was just walking past the drive table, it was not an active decision process,” said Adam.

In 2013, while a graduate student at University of California Berkeley, he got a call from Gift of Life – he was a match for a man in desperate need of a transplant, and would he be willing to donate stem cells? “I felt like my number was drawn and was being given a special opportunity to help someone else,” said Adam. “I no longer biked to campus because I suddenly felt very self-conscious – now someone else’s life depended on my safety.”

Adam donated stem cells and was given his Gift of Life blanket (which always sits on his couch) and returned to grad school. Donors and recipients must remain anonymous for the first year in the United States, but the first two years in Germany. Although he received several health updates about his recipient, when the time came to give permission for the identity exchange, Adam did not fill it out.

“At the time I felt that on some level, getting in contact was a way of asking for his thanks, and I didn’t feel that was right,” said Adam. “A few years later I thought it through again and decided that if my recipient wanted to know the person who had donated to him, who was I to say no?”

He sent the form in and after a few months got an email from Christopher introducing himself. Although they exchanged a few emails, they didn’t establish a regular connection. But all that changed in 2018.

Now 34 and a resident of Darien, Ill., Adam received an email from Christopher’s sister, Eva. Christopher and his fiancée were planning their wedding, and Eva and the groomsmen wanted to invite Adam to come to the wedding as a surprise.

Adam’s sister Rachel joined in the fun, and the two flew to Germany together. The special moment went off without a hitch, and Adam said that even though the wedding party went on until 4 a.m., breakfast was punctually served on time at 10 a.m.!

A few days later, Christopher and Maike gave Adam and Rachel a tour of Neustadt, including their new home under construction, and the day after that Christopher took them to Cologne. They visited the hospital where he had spent so much time and received his transplant, and met some of the transplant unit staff who were on duty.

Then, it was Adam and Rachel’s turn. For their honeymoon in November, Christopher and Maike were flying to New York City where they would board a cruise to the Caribbean. They had a free day, so Adam flew in from Chicago and he and Rachel, who lives in Manhattan, took them out for brunch, a tour of the area, and then a stop for microbrews – which are unknown in Germany.

The miles between Chicago and Neustadt now seem much smaller, and Adam looks forward to many future visits with Christopher.

Adam is a materials scientist and works at the Argonne National Laboratory where he is conducting research in new batteries for electric vehicles and consumer electronics. He’s also a guitarist and a member of the rock band “Lavisher”, and plays ultimate Frisbee in his free time. 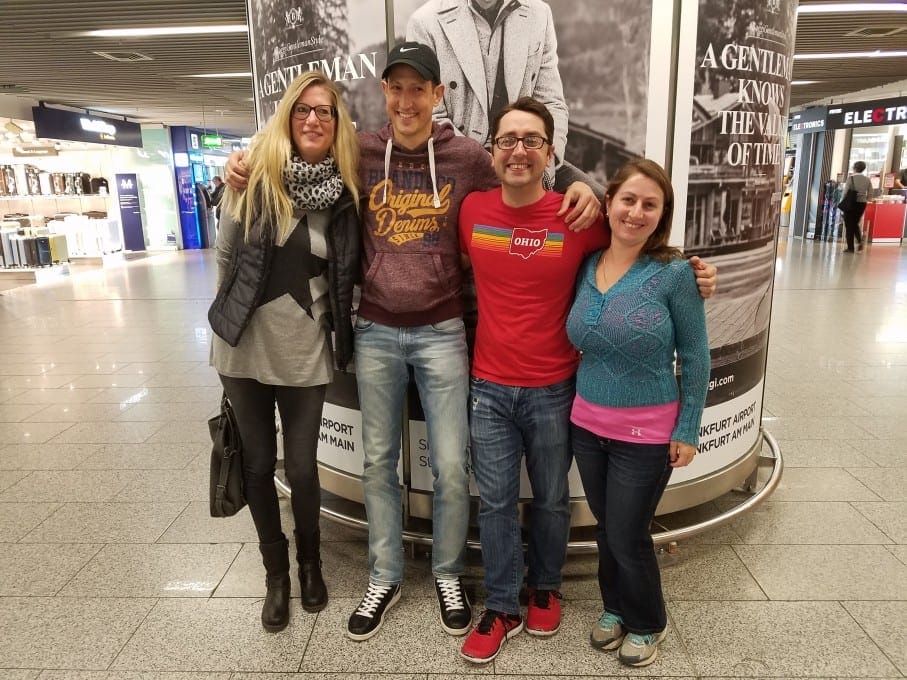