Cale was on his Birthright Israel trip in May 2019 when a representative from Gift of Life Marrow Registry came in to make a presentation to his tour group.

“The presentation was moving and powerful,” said Cale, a Georgetown University student and member of the LGBTQ+ community. “When I saw the way that donating could help someone’s life, I felt like I wanted to be a part of the registry and signed up. I understood the odds of matching someone else are very low, so I never expected it to happen.”

After a while Cale forgot he had signed up and was surprised and excited to hear from Gift of Life in October 2021 – he was a match for a man in his 60s battling Acute Myelogenous Leukemia, and by donating peripheral blood stem cells, Cale could give him his best chance at a cure.

“I was excited and happy, but I had a lot of questions about the process,” said Cale. “After the donor services coordinator explained how it worked, I was ready to move ahead.”

Cale and his partner went out to dinner to celebrate, and shared the news with his family, who also wanted to be filled in about what blood stem cells are and how the process works. They were happy for him to donate after learning that blood stem cells, formed in the bone marrow, can be transplanted to a blood cancer patient to create a whole new immune and bone marrow system – one that is free of cancer.

Cale was happy to realize during the process that as a gay man, his donation was welcome and no restrictions were placed on him, either while joining the registry or for donating.

“I would love people to know that gay men can donate,” he said. “There have been a lot of antiquated policies around whole blood donation and many people think that also applies to stem cell donation. It doesn’t! Gift of Life and the other marrow registries do not discriminate based on your sexual preference, and that’s a huge plus. It doesn’t matter who you are, you can sign up, register, and help those in need. You never know when you may be able to help a stranger.”

Gift of Life and the other marrow registries do not discriminate based on your sexual preference, and that’s a huge plus. It doesn’t matter who you are, you can sign up, register, and help those in need. You never know when you may be able to help a stranger.

Cale received five shots of Neupogen to encourage his body to produce more stems cells, and to move them into his circulating blood for collection. The shots are given once a day for the four days before donation, then immediately before donating on collection day.

“The collection center took great care of me,” said Cale. “I watched two action movies, I think one of them was Independence Day, and after a bit over four hours I was done.” Stem cell collection typically takes four to six hours, and donors can read, watch movies, or simply nap during that time.

Since Cale was donating near Washington, D.C., Gift of Life’s Chairman Emeritus and Co-President William A. Begal stopped in to visit with him. “We had a great conversation,” said Cale. “I’m majoring in International Political Science, so we chatted about the current state of international affairs. It was nice of him to take the time to check on me during my donation.”

Cale has been thinking about his recipient and hoping he’s doing well.

“I would love to know if the treatment works well for him,” he said. “It would be phenomenal to meet him and see that he came through this successfully. This has reconfirmed my personal commitment to the community at large; we should help others when we can.”

Cale also participated in Gift of Life’s “Swab With Pride” campaign to help spread the word that everyone 18 to 35 years old and in general good health can join the registry and donate.

Cale, 23, is majoring in International Political Science in the Edward A. Walsh School of Foreign Service at Georgetown University. He is focusing on international security with a minor in Mandarin Chinese. His time in Taiwan as a foreign exchange student during high school has been a catalyst for him. In his free time, he and his dog Liebe walk down the National Mall. He also reads, follows the news, studies yoga, works out, and spends time with friends. 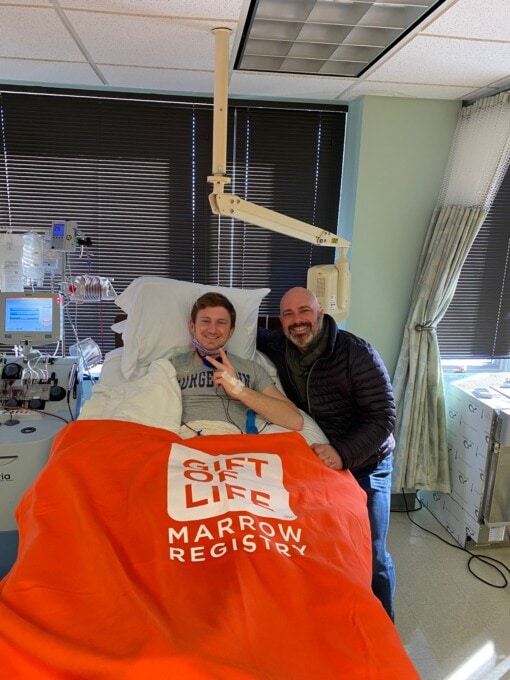