In April 1999, after 13 months in remission, I relapsed with T-cell Acute Lymphoblastic Leukaemia. Initial diagnosis affords you a blanket of naivete, where you hope that chemotherapy and treatment isn’t as bad as they tell you. Relapse is an entirely different beast – you know what you have to face, you know no one else can ease the burden. You just don’t know if you can deal with the horror again – physically, mentally or emotionally.

I met Professor Bradstock for the first time within a fortnight of my relapse. He was a slight man with a perennially bleak expression. I did not see him smile once in the first year I knew him. He explained that because I had relapsed after an autologous stem cell transplant (a transplant using my own blood-making or haemopoietic stem cells), that that, and maintenance chemotherapy were no longer options on the table. The only winning card in my extremely poor hand, was a transplant of bone marrow or haemopoietic stem cells from someone else. And my chance of survival, even if we did find a match, was only 12%.

There were no matches anywhere in the world.

In the background of this search, I had gone back into remission after months of chemotherapy, and I had even started to grow a fine fuzz of hair. Professor Bradstock said they would book a bed in the transplant unit for October, even though a donor hadn’t been found.

“It would be more of a tragedy to have a donor but no bed, than a bed and no donor.”

I was yet to be convinced. But it did afford me some valuable time.

My dad is a GP, and one of his patients suggested cord blood, as she knew the first child in Australia to receive this as a transplant. Blood from the umbilical cord is rich in haemopoietic stem cells, and it is usually discarded after birth. Collection of these cells causes no harm to mother or baby, but only 50 millilitres is routinely collected. For this reason, it had not been used that often in bone marrow transplants for adults.

“You weigh as much as a big kid,” my haematologist, Dr Kwan, shrugged. “It’s worth a shot.”

Within a few months, they had matched me with approximately four cord blood donors from Dusseldorf to the UK to America. I learned later, that due to the immaturity of the cells within cord blood, a less perfect match could be tolerated.

On the 8th of October 1999, I became the first adult in Australia to receive a bone marrow transplant from cord blood. My donor was a baby girl born in St Louis, USA, in 1997, the year I was originally diagnosed. The biggest blessing for being a small adult.

In the 21 years since, I have had my share of long-term side effects – avascular necrosis, cataracts, osteopenia, high iron and odd little quirks: like the inability to regulate body temperature and feet that cramp at night. But I have also gained a PhD in Immunology, become an aunt seven times, and become a godmother to four children from family and friends. I have seen the Northern Lights, watched the sunset from the Eiffel Tower, I have sung the seventh inning stretch at the Yankees stadium and been at the Australian Open when Federer won.

I have learned that the DNA in my blood and my cheek swab are not mine, but my donors. That her ancestors came from Western Europe, and that she wasn’t the little Chinese baby I had imagined.

I am forever grateful for the donation her parents made 23 years ago. For the advances in Science. For the pioneering spirit of my haematologists. For the expertise and kindness of my haematology nurses.  For the love, support and endless encouragement of my family and friends.

I celebrate my Transplant Anniversary every year. 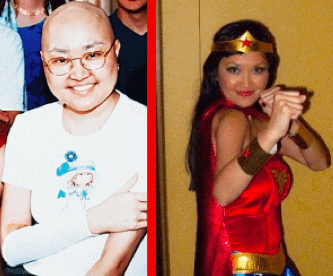