“I was really surprised when, 13 years later, they were still able to find me!” said Gabriel Sackett, a 31-year-old security manager at Ben Gurion International Airport in Tel Aviv, Israel. He had joined the Gift of Life Marrow Registry in September 2003 during a drive at Sh’or Yoshuv Institute in Lawrence, N.Y.

“As soon as I had the opportunity to join the registry, I did it without hesitation. If it can save someone’s life, it must be done,” said Gabriel. What he had not counted on was that when the call came for him to donate peripheral blood stem cells to a 52-year-old woman suffering from Acute Myelogenous Leukemia, it would be years later and he would be living and working in Israel with a wife and children to consider. Gift of Life arranged for Gabriel to travel to the U.S. to make the donation at the Hackensack Medical Center in New Jersey.

Fortunately, Gabriel had plenty of support from his family, friends and community. “Just like everyone else, my life is very busy,” he said. “I literally put my life on hold for almost a month, since I live in Israel and had to come to the U.S. My wife Rivke felt there was no question I needed to do this.” Gabriel’s stem cell donation was made complex by the distance involved, but his Gift of Life donation team was there for him the entire time.

The donation of stem cells involves drawing blood from one arm into an apheresis machine, where the needed stem cells are identified and collected. The remaining blood is returned to the donor through the other arm.

He also has a message for his recipient, “I will say to her that we are all in this together, and the battle is up to all of us to fight. I wish her much health in the future.”

Gabriel, a father of three, enjoys playing with his children, running in half marathon races and drinking good coffee and wine. He is building his own outdoor kitchen, and says that while he could have paid someone to do it quickly, he feels that when he finally finishes it himself the steaks will taste so much better! 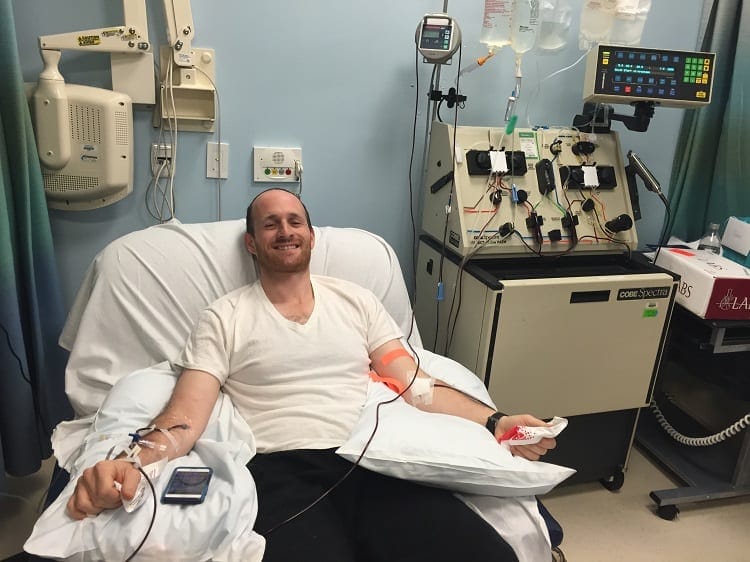