In 2012, Jorge, a 46-year-old man, presented an enlarged spleen in a routine medical evaluation. This finding, together with the night sweats, warranted further investigation. The diagnosis of Polycythaemia Vera was then established. His physician informed him that it was a haemato-oncological condition of unknown nature, characterized by an overproduction of red blood cells in the bone marrow and an unpredictable clinical course. All these features frightened him; however, appropriate therapy was started and the disease remained controlled.

In 2020, there was a sudden worsening of his condition, with asthenia and splenic and hepatic enlargement. Further study revealed the presence of blasts in the peripheral blood and in the bone marrow. Due to a rapid progression to acute myeloid leukaemia, standard chemotherapy was started, and Jorge was proposed a bone marrow transplant.

As he never considered the need of transplantation, it was an emotional shock for Jorge. In the middle of this, the primary concern was his only son, who was still in college and whom he would never want to harm… and he never did. He asked for a second opinion, which was in agreement with the first. He remembers thinking: “I got here and there’s no way back, so I’m going to fight until the end of the process”.

As none of the family members was a match, the search for an unrelated donor began. He asked for help from many friends and companies, but the match ended up being found in the international registry.

In May 2021, he was finally admitted at the oncological hospital for transplantation. He had just two days of fever along with the conditioning regimen before the allograft. With no further complaints, he was able to practice cycling during the isolation period.

Jorge recognizes that the donated cells were an enormous help to his life. Nowadays, the emotion when he talks about his donor is still visible. The desire to express his gratitude is so intense that he even wrote an acknowledgment to his benefactor, as Jorge calls the donor. 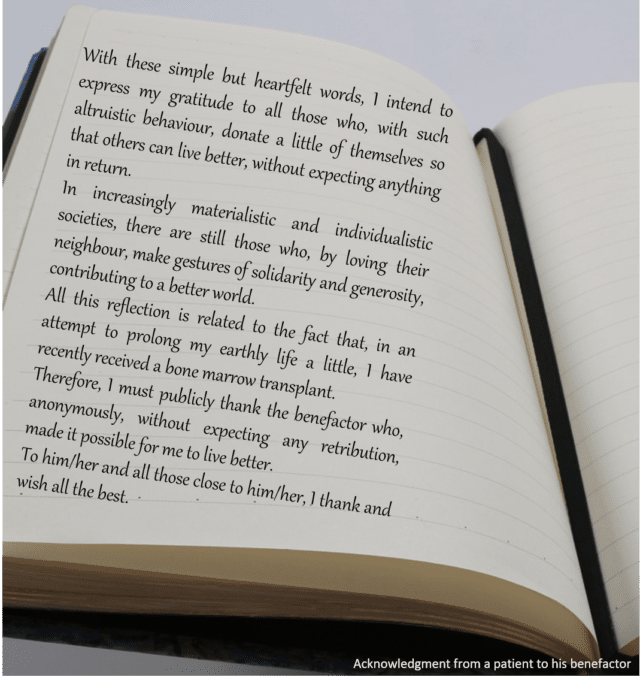