January 15 will always be a special day for marrow donor Ethan Krafft of Virginia and transplant recipient, Rich Little, an Oregon native. These two men from opposite sides of the country now share a blood type and full immune system, thanks to a peripheral blood stem cell (PBSC) transplant. They met in person for the first time on Sunday, January 15, 2017 at the Gift of Life Steps for Life 5K Run and Walk of South Florida, before a crowd of 600 supporters.

Not long ago, Rich didn’t think he had much time left, even though he was only 60 years old. In early 2014, he was diagnosed with myelodysplastic syndrome, a form of cancer that disrupts the production of blood cells. By 2015, it was clear that chemotherapy treatments were not effective in improving his condition. “We were looking at a smaller and smaller window as far as life expectancy,” said Rich.

His medical team, located in Portland, Ore., felt that a PBSC transplant offered him the best possibility of a cure, and turned to the worldwide marrow registry to search for a matching donor. Since matches are based on genetic factors, the best chance of a match is with someone of the same ethnic background. Rich had no family members who could donate to him, and because of his mixed ethnicity, he was concerned that he would have a difficult time finding a matching donor.

Two thousand miles to the east, a student at Ohio University, Ethan Krafft along with other members of his business fraternity, joined the Gift of Life Marrow Registry as volunteer bone marrow donors. Because the most requested donors fall in the 18-to-25 age group, Gift of Life holds donor recruitment drives on college campuses across the United States. Younger donors are generally healthier and produce more of the cells needed for transplantation.

When Rich’s medical team began searching for a match, Ethan’s tissue profile was quickly found. Ethan received a call from Gift of Life in May 2015 – just over a year after he joined the registry – telling him he had the chance to save someone’s life. He said that although the call was a surprise, “It was an amazing feeling realizing for the first time that I had an opportunity to save a life. I felt extremely lucky to be put in this situation, and that feeling stuck with me throughout the process.”

Ethan had a blood test to confirm that he was a perfect match for Rich, and on August 6, 2015, with the support of family and friends, he was accompanied to the collection center by a Gift of Life coordinator. The collection process is similar to donating platelets, with the donor’s blood drawn from one arm, the stem cells collected by an apheresis machine, then the remaining blood is returned to the other arm.

A courier brought the stem cells to the transplant center in Portland, where Rich had been prepared for transplant, a process that involves several stages to remove the malfunctioning immune system. Once he received his transplant, Rich began to develop an entirely new immune system and bone marrow identical to Ethan’s. In fact, Ethan’s allergy to shrimp now means that Rich, too, will have to take care in restaurants!

A retired teacher, Rich found tremendous support during his treatment and recovery from former students, co-workers and childhood classmates. “Some members of my caregiver team came from as far as four hours away,” he said.

Rich’s opportunity to finally meet his donor in person occurred just over a year after his transplant. He and Ethan were both invited by Gift of Life to visit the South Florida for the Steps for Life 5K, where they met for the first time during the opening ceremony.

Ethan and Rich were introduced by longtime Gift of Life supporter and volunteer, Wendy Schulman, founder of Steps for Life. The moment was highly emotional, as the two men embraced. After their meeting, Ethan and Rich led off the start of the race.

Ethan offers advice to anyone considering joining the registry and becoming a donor: “I strongly encourage anyone to go through with it, as there is no amount of money in the world that can provide you with the feeling you get from saving a life.”

Rich is a retired school teacher and school district administrator who has a second career as a ceramic artist. His studio is located on his family’s original Oregon homestead, founded five generations ago.

Ethan graduated from Ohio University last year and now resides near Washington, D.C. He enjoys travel, scuba diving, and is passionate about conservation and the development of green energy alternatives. 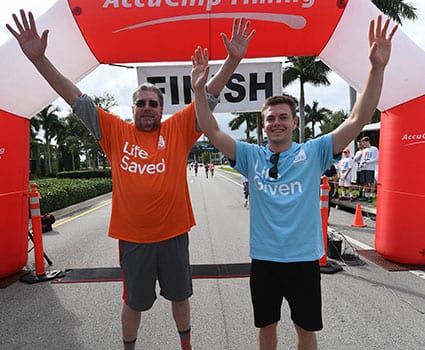