Mark Ritson, a company director from Sheffield in the north of England, was diagnosed with severe aplastic anaemia in 2009, meaning his body did not produce enough new blood cells. At the time, the Anthony Nolan stem cell register searched worldwide for a donor to provide Mark with new stem cells which could cure him, but without success. Although an alternative treatment worked temporarily, two years later a relapse forced him to return to hospital. ‘This time the doctors said a stem cell transplant was my only hope of a cure,’ said Mark. ‘The last search hadn’t found a match so I was wary about my chances. But Anthony Nolan searched the register again and to my relief, they found a match from Germany.’ Mark’s ‘genetic twin’ was a 19-year-old woman named Jacqueline, who amazingly had only signed up to the register a few weeks earlier.

The transplant went ahead in 2012, with Jacqueline donating her stem cells in Germany to be flown to the UK. Mark was able to leave hospital a week before the birth of his eldest daughter, Iona, now four. But the family’s happiness at their new arrival was soon interrupted. ‘Within weeks my blood count started dropping and it was obvious the transplant had failed,’ said Mark. ‘The doctors had to re-approach Jacqueline for another donation and I was nervous that she would be feeling ill after the transplant and wouldn’t want to do it again. What I didn’t know was that she had been ringing the transplant centre in Germany asking how it went, and when she heard the transplant had failed she offered to donate again, before they even asked.’

Complications from the second transplant left Mark feeling weak, and he spent 200 days in hospital during his first year post-transplant. ‘It was hard not being able to spend time with my daughter and having such a long time off work, but as time went on I got stronger and stronger, and soon I was feeling back to normal,’ he said.

Anonymity rules mean that transplant donors and recipients can’t reveal their identities to each other for two years, but can exchange letters through Anthony Nolan. Nevertheless, Mark often wondered about the stranger who had selflessly donated to save his life – twice. ‘I did wonder who my donor was, and as soon as a year had passed I wrote a letter to her through Anthony Nolan. I was interested to know more about her because I now had her immune system – even my blood group changed to hers. I wanted to thank her as I knew I wouldn’t have lived without those transplants.’

The pair continued to exchange emails and they met for the first time at Easter this year. ‘Jacqueline flew over from Germany and stayed with my family for three days,’ said Mark. ‘On Thursday we went to the hospital that treated me and met the transplant team, which was a special moment for all of us. ‘When you need a transplant you can’t choose the person that will save you, but if I could I would have chosen Jacqueline. She was extremely kind and I hope we will meet again.’ As for the language barrier, Mark joked: ‘She speaks better English than me!’

Mark ran the London Marathon this year to raise money to pay for more donors to join the register, giving other people with blood cancer a second chance at life. ‘Without the amazing, selfless young person who put herself forward to provide this lifeline for me, I would probably have lost the chance to see my children grow up.’ 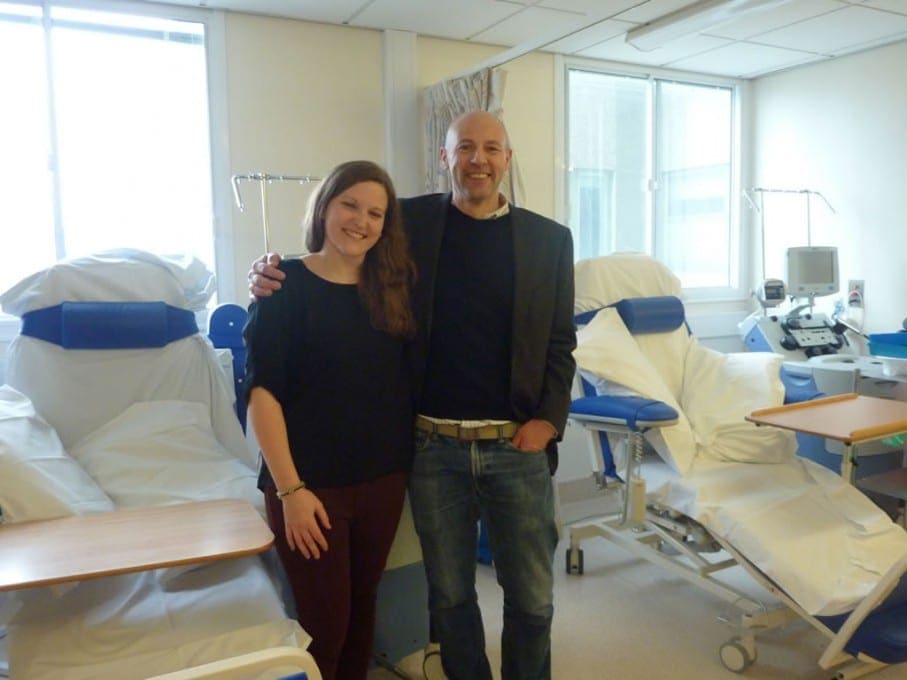