What started out as a regular day on January 19th, 2017 became a visit to the pediatrician which turned into our daughter, Sophie winding up in A&E at Queen Mary Hospital. It would be a very long time before she would sleep in her own bed again. She had regular flu symptoms as all toddlers do at age 14 months. She was sent to hospital as a precautionary measure but then her oxygen saturation levels started dropping very quickly. Sophie’s lungs deteriorated with each subsequent x-ray and every breathing apparatus used to intervene failed. Sophie was eventually placed on life support, an ECMO machine designed to bypass her lungs so we could keep her alive.

I remember signing the disclaimer in total shock and numb with disbelief. The list of potential complications and side effects went on for pages and pages, with no guarantee it would work. But Sophie’s condition was so critical that it really was the very last hope. Sophie ended up being on ECMO life support for 12 days or 288 hours or 17,280 minutes. Those were the darkest moments of my life, heavy with uncertainty and just sheer helplessness.

Miraculously, our little warrior pulled through and started breathing on her own again. In some ways, we as parents also started breathing again, but little did we know that this was just the beginning of a long journey. Our doctors were baffled by how severe a common RSV virus had affected Sophie and started to explore whether there were underlying issues. So they kept her in isolation at the hospital while various tests were being conducted to understand her immune system better. Sophie was finally discharged in April around Easter time, but we had to follow strict isolation at home to prevent her from getting sick again.

On May 9th, 2017 we received Sophie’s official diagnosis. Genetic tests confirmed the doctors’ suspicions that something was wrong with her immune system. She had inherited defective genes from both parents causing Severe Combined Immunodeficiency (SCID). Also known as bubble boy disease, the incidence of this super rare disorder is about 1 in every 100,000, which translates to 1-2 cases per year in Hong Kong. Sophie had been born with a dysfunctional and virtually non-existent immune system, incapable of fighting the most common of viruses. The only treatment available was a bone marrow transplant, which would give her a chance to lead a healthy, normal life. The alternative was a future of fear, the fear that any infection could potentially be as life threatening as the last one. She would basically be living in a bubble her whole life. Without treatment, babies with SCID usually die from infections within the first two years of life.

We started researching what a bone marrow transplant would mean for Sophie and it was pretty daunting. Firstly, a suitable donor would need to be identified and then agree to donate their bone marrow. Then Sophie would be required to undergo intense chemotherapy to wipe out her existing system and make space for the new cells. Finally, there’s the risk of her body rejecting the new donor cells and a host of other possible complications post-transplant. But we knew the alternative was much worse. So the search for a suitable bone marrow or cord blood donor began. Our medical team through Hong Kong Bone Marrow Donor Registry searched the various databases around the world and hoped that a suitable match would come up. If not, we would just wait and continue to wait with life hanging by a thread, living in a bubble for fear that any common virus might send our baby girl straight back to ICU.

We were extremely lucky and only had to wait a month before a 10/10 matched donor had been located in Hong Kong. The donor had responded with enthusiasm and Sophie’s bone marrow transplant was scheduled for August 3rd, 2017. We often wondered who this mysterious donor was, but in reality it could’ve been anyone. All we knew was that he was a young male in Hong Kong with a heart of gold! We didn’t know this at the time, but he was given the same information about Sophie. He only knew her as a little 1.5 year old girl in Hong Kong who desperately needed his help.

Everything proceeded along for the transplant as planned. Most importantly, the months of isolation beforehand had paid off as she was free from illness which meant a higher chance of transplant success. Sophie got a central line in for all the drugs and infusions she would receive, drugs that we had initially never heard of and could barely pronounce but understood intimately by the end. We checked into Queen Mary Hospital for the second time in 2017, but this time with more preparation and knowledge of what was about to go down. Sophie started her 12 days of chemo regimen on 23rd July, the same day a T8 was hoisted for Typhoon Roke. We tried not to read into that too much. The actual transplant day on 3rd August was pretty uneventful despite all the build up to it. 94mL of fresh blood in a bag that had been depleted of red blood cells took all of 45 minutes to infuse.

The following month would be spent in bone marrow transplant (BMT) room 16, with my husband and I taking rotating shifts on a 24 hour basis to look after Sophie while her new blood cells grew. We decorated the drab hospital walls with fun stickers and stocked up the room with lots of toys and books so that this second home would feel a little less scary and a little more child friendly. We were disinfecting all these toys and books constantly since the chemotherapy had wiped out all of Sophie’s defenses. We had to be ultra careful about introducing germs into the room, wearing masks and hospital gowns full time and disinfecting our hands until they were dry and raw. But this was a very small sacrifice compared to what Sophie was going through. The chemo drugs had started to make her feel weak, she had lost her appetite and her skin colour had darkened quite a few shades despite not having seen the sun in weeks. She was also losing hair so my husband had the miserable task of shaving it all off. Sophie ran a high fever for 2.5 weeks straight.

During this challenging time, we vividly recall the check on vitals every 4 hours, all day and all night long, the rounds of doctors twice daily, the endless numbers representing her cell counts, the ferocious note taking to try and remember everything, the cocktail of drugs and medicines that Sophie was taking multiple times a day. All this would not have been possible without the support and guidance of the amazing nurses who looked after Sophie. They became our second family.

Sophie’s new cells grew successfully and she was allowed to go home in early September. We were all physically and mentally exhausted so it was a lovely feeling to be back at home again. We still had frequent visits to the hospital for blood tests and to clean her central line. These gradually decreased in frequency as her new immune system started to build up. We started hitting big milestones when Sophie was cleared to eat out, visit playgrounds, do play dates and ride the tram. The first day of school for every parent is a special day, but for us it was extra special to see our little girl thriving after everything she had been through.

About a year after the transplant, we had the incredible opportunity to meet Sophie’s donor through the Hong Kong Bone Marrow Donor Registry. Although Sophie was too small to really understand what was going on, it was an emotional occasion for our family. We were very happy that Eric could finally meet Sophie and see the difference that he has made to us all. Eric was the stranger who kindly and unselfishly donated his bone marrow without knowing anything about Sophie or her condition. He gave our little girl and our family the biggest gift of all, the gift of life and hope.

No words can express how extremely grateful to Eric we are for giving our little girl an opportunity to live life, to explore the world, to make friends, to become an older sister and for allowing us to be parents. Sophie has become a vivacious, energetic, kind, inquisitive and caring little person who speaks her mind. She is a tough cookie with lots of determination and an infectious smile. She loves all the things that any 4.5 year old girl does… dancing, singing, painting, Legos, riding bikes, eating bucket loads of cheese and everything Frozen. It has been amazing to watch her grow up and we don’t take anything for granted.

Sophie recently celebrated her 3rd Life Day, which is the 3 year anniversary of her bone marrow transplant. When she asked me who Uncle Eric is, I responded with: “He’s a very kind person who helped you by giving you his special blood. He is the true definition of what it means to be a superhero.”

Sophie then said to me: “I want to be like Uncle Eric when I grow up.”

Everyone has the ability to give the gift of life and hope. Do the superhero thing and register to become a bone marrow donor today! 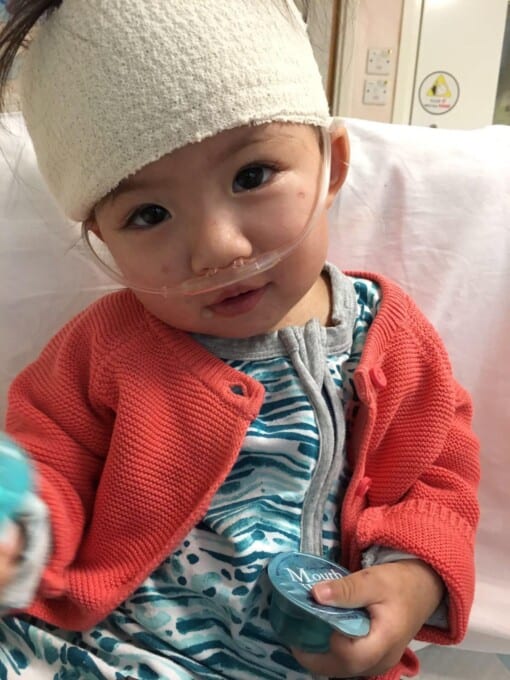