In Christmas 2010 Steve was working as the head teacher of a secondary school and lived with his wife and two daughters. Steve had just been skiing in France and came back feeling tired, with aching ribs and back. ‘I thought I must have cracked a rib or had a muscle injury or something – I certainly didn’t imagine anything could be seriously wrong,’ said Steve.

One day not long afterwards Steve collapsed. He was taken to hospital where the doctors diagnosed him with myeloma, a form of blood cancer, which had also caused Steve’s kidneys to fail. ‘Talking to my family about it was the hardest part,’ said Steve. ‘My youngest daughter was taking her finals at university, and my oldest was travelling in Australia. It was incredibly tough, telling her what had happened over the phone.’

Steve’s consultant put in a request to search the Anthony Nolan donor register, and they found him a 10/10 match.‘It was fantastic news!’ said Steve. The transplant took place in the summer of 2012, but it took six months for the donor cells to engraft. ‘My body started fighting back, and the stem cells started taking hold. I contracted Graft versus Host Disease, which manifested in a series of rashes.’

Within three or four months, however, Steve was almost completely recovered and by December 2013 he was in remission, and started thinking about the donor who had saved his life. ‘I didn’t know anything about my donor, apart from the fact that he was a man in his twenties,’ said Steve. ‘I always thought that when I found out who he was, I would take him out for a slap-up meal and a few pints!’ Steve sent him an anonymous thank you card and they began to exchange emails. Steve discovered he had a lot in common with his donor, Tom: both are keen mountain bikers.

Steve and Tom met for the first time in September 2015, to celebrate World Marrow Donor Day.

‘Until then he was just a bag of cells – it was incredible to be able to put a face to my stem cells!’ said Steve. ‘More than that, it was a chance for me to express my gratitude. He put himself out for a stranger and he had no idea who that person was, and for that I am extremely thankful. Tom is one of a kind.’ 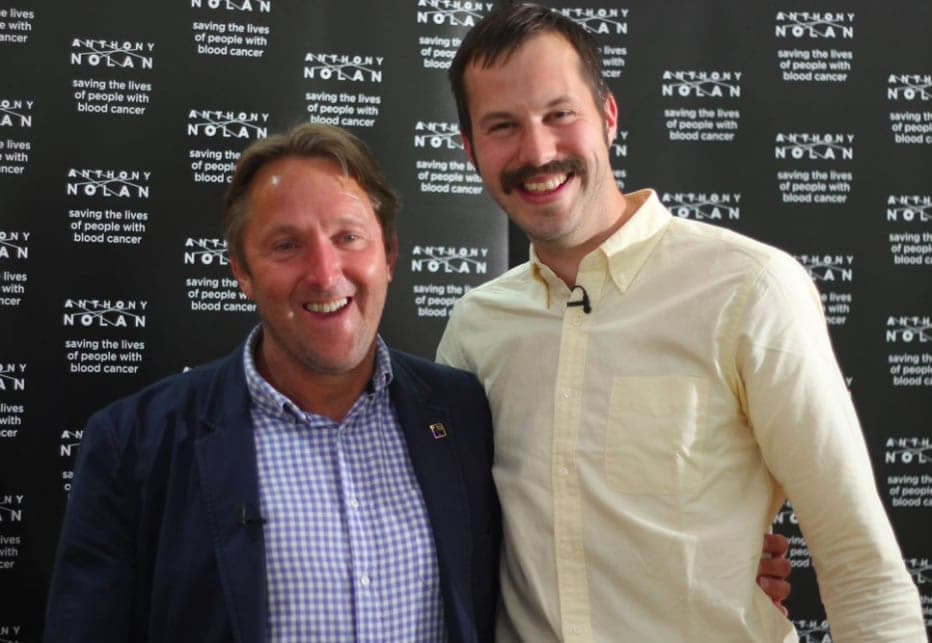