Sibo became interested in donating blood while studying at Rhenish Girls’ High School in Stellenbosch, as donation programmes were held at Paul Roos Gymnasium across the road. Since 2013, she has been a regular blood donor. ‘If I’m healthy and able to donate blood, it’s the least I can do. I’m only thinking of myself if I don’t donate!’ she says.

At the beginning of 2017, a person who recruits people to donate bone marrow spoke to Sibo while she was donating blood on campus at UWC. ‘She explained to me what it means to donate bone marrow, that a person who is eligible for a stem-cell match needed to be exactly like the other person who will be helped, and that race plays a big part. Would I think about donating?’ A bone marrow donor is usually found in the patient’s own racial group, and in South Africa there is a great need for more black donors to save patients with leukaemia and other blood diseases. Sibo registered.

Amazingly, in January 2018 she was contacted by the SABMR to ask if she would be willing to undergo some blood tests as she might be a match for a patient. After a series of tests were done, another call came: she was a perfect match.

Why would she undergo this inconvenience and the possible pain, a few people she knew asked. ‘There are things involved here that are important,’ she said. ‘This is not about you; it’s about somebody else. You’re saving a life so that someone else can do the things they would like to.’ She saw the donation that she was going to make as a great opportunity to teach others.

Sibo’s donation was scheduled to be done before writing examinations, in September 2018. For the four days preceding this, she was injected with Neupogen (which she chose to inject herself) in order to stimulate her bones to produce more stem cells. On the morning of the donation day, she and two of her friends drove to Netcare Kuilsriver Hospital, where the process was done under the supervision of kind hospital staff, a staff member of SABMR and a social worker. ‘It took about six hours. One of my friends was just as fascinated by the process as I was; we’ve watched a lot of Grey’s Anatomy!’ Sibo laughed. From a tube inserted into the vein in her thigh, her blood was sent to a machine where the stem cells were separated from her blood; the rest of her blood was returned to her.

‘Then the tears flowed when I thought about this bag of stem cells now going to the person who needed it. The SABMR was admirable: there was nothing that they wouldn’t do to make sure that everything goes smoothly.’ Within three days, the small incision for the needle and transmission tube had healed. ‘Everything went back to normal. I had no side-effects. It really was quite an experience,’ she says.

The only thing that Sibo knows about the recipient of her bone marrow is that the patient is a South African child. ‘It’s great to me that I was saving a child’s life,’ she says. This donation especially touched the hearts of Sibo’s family, as her grandmother’s sister had died recently due to leukaemia shortly before her donation. ‘I think this is one of the greatest things I have ever done. This is one of the most beautiful acts of humanity,’ she says. ‘If I’m healthy and I can give someone a chance to live life fully, it is such a great honour!’ 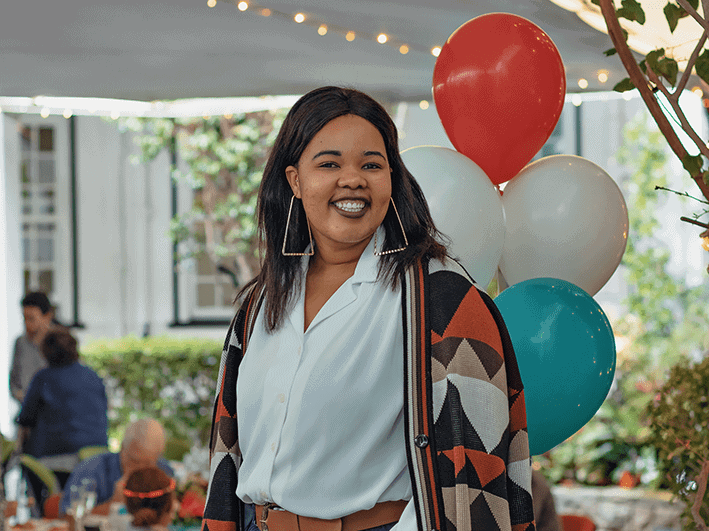