“The purpose of life is not to be happy. It is to be useful… to have it make some difference that you have lived and lived well.” – Ralph Waldo Emerson

For bone marrow transplant recipients Robbie Eddles and Aaron Lipschitz and their families, the search for a donor was an emotional and desperate time. Both families kicked off massive donor drives across South Africa. From the beginning, they knew it was very unlikely they would find a match for Robbie or Aaron from a local drive. They did it anyways – in hopes that a donor would be found for someone else in need.

When Robbie Eddles was diagnosed with leukemia for the third time in 2019 and required a bone marrow transplant, his aunt shared a Facebook post urging people to get registered with the SABMR. The post went viral, and #RobbiesWarriors was born. The SABMR quickly jumped on board, working with the family to coordinate donor drives around the country, starting with registration for matrics at Robbie’s school.

Robbie and his family knew that finding a donor from one of these drives would be extremely unlikely. For Robbie, it didn’t matter. “I knew it was a one in a million chance, but I also knew that I’m not the only person with this problem. If in the process of my search, we could find one for someone else – that would be amazing.”

Robbie’s wish soon came true: one of Robbie’s friends, who registered at Robbie’s first donor drive, got the call to be a donor for a patient in need. Now, another family friend is also in final donor testing.

“We wanted to get more people registered no matter what,” Robbie’s mother Colleen explained. “We knew that if people were willing to be a donor for Robbie, they would also want to be a donor for someone else, because they understand that person’s plight and can resonate with their pain, desperation, and confusion. You have to realize that you’re probably not going to be able to find a donor for your own child, but you’re doing it for so many others out there.”

In the end, it was Robbie’s sister Gilly who would be his lifesaving donor, through an experimental treatment in Israel that uses genetic haploid matches for transplants. The transplant, which occurred in August 2019, successfully cured Robbie of his cancer.

Although Robbie is healed, the Eddles family plans to continue with donor drives, including annual matric registration drives at Robbie’s school and others. But Colleen stressed that there’s so much more people can do besides registering. “There are so many people who want to help,” she explained, “but they’re past the 45-year-old cutoff. I tell people: you can either register to donate stem cells, or you can donate money. If you’re too old, donate money.” Several friends of the Eddles family donated money and computers to the SABMR so that they could hire more staff and register more donors faster.

The same is true for kids under 18, the minimum age to register. Robbie told the story of one friend who was too young to register but helped in another huge way. “He was only 17 at the time and he was bummed he couldn’t register. But he had just won a huge award for the Wildlife Photo of the Year. He came to me and said ‘Please, I want to give you my prize money.’ And I responded, ‘Please don’t give me the money. If you want to help, help the community by donating to SABMR.’ And he did.”

Colleen says of SABMR, “They saved Robbie’s life and he now has a bright future ahead of him thanks to them, as do so many others now worldwide!”

While still an infant, Aaron Lipschitz was diagnosed with a metabolic absorption disorder. The disorder made him unable to tolerate any food besides a specialized hypoallergenic formula which he received through an intravenous feeding tube. When he was three, after years of infections that baffled his doctors, Aaron was also diagnosed with Interleukin-12 Receptor Defect, a defect preventing his body from fighting minor infections. The defect affects fewer than 300 people worldwide. After Aaron endured a third, almost fatal attack of Septicemia, his doctors decided to undergo a bone marrow transplant.

Aaron’s mother, Taryn, said they knew a local donor probably wouldn’t be found, but decided to coordinate drives anyways. “The SABMR told us that if there was a donor, they would probably be overseas. But we thought, let’s take this opportunity to make people aware about the Registry. Maybe we’ll find a donor for Aaron and maybe we won’t, but it didn’t really matter. It was about awareness.”

In a single week, dubbed Save Aaron week, over 500 new donors were registered, and that number grew as drives expanded in Johannesburg and Cape Town. Aaron’s primary physician, Dr. Deon Smith, called the SABMR “extraordinary” in its pursuit of a donor for Aaron. It was the first drive since 1996 that the Registry has organized a donor drive independently from its previous donor recruitment partner.

Like Robbie, Aaron’s family received a call last year to say that one of Aaron’s registration drives helped find a donor for a patient in need. When she announced the news to followers of the family’s Save Aaron Facebook page, Aaron’s mother wrote, “He is already saving lives at the age of 4.”

Aaron received his transplant in August 2018. After an unexpected reaction called a cytokine storm, he spent a month in the intensive care unit at Red Cross Children’s Hospital. Aaron’s doctors would later discover another genetic variant, Fox P3, that they believe was responsible for the reaction. Thankfully, since his recovery, Aaron’s time at the hospital has dropped significantly and his doctors have seen a major improvement in his body’s ability to fight infections. Nowadays, Aaron is playing putt-putt, soccer, and tennis, taking swimming and golf lessons, and teaching himself to read. He still receives weekly immunoglobulins treatment and has a feeding tube, now in his stomach, but his doctors hope he will soon be able to eat enough food that it can be removed.
Through every challenge, Aaron’s medical team has been amazed by his resilience. As Dr. Smith said, “Aaron has survival stamped all over him.” 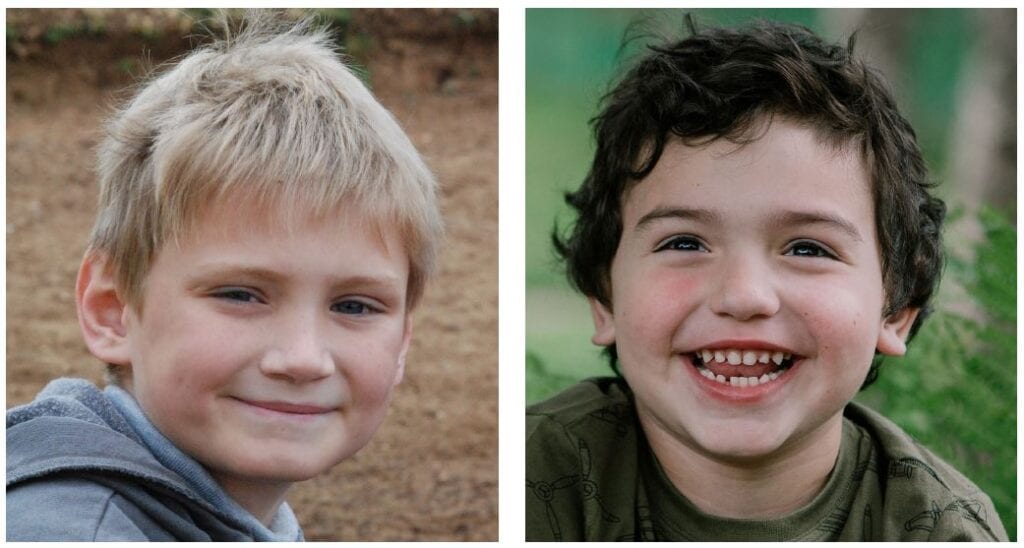